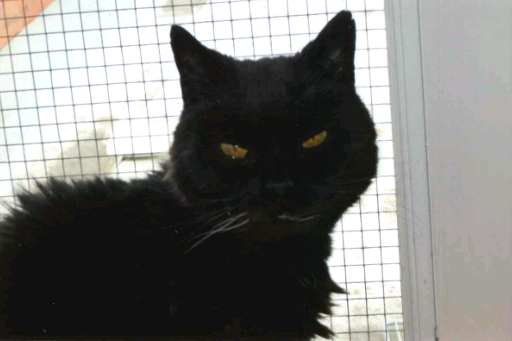 Hello, my name is Gizmo and I am temporarily residing at The Heatons Animal Rescue Group.
When I arrived my first friend was a little black cat called Dinky-Doo, but his friends could call him Dinky.
He had been here at the sanctuary for almost eighteen months and despite his slight build he considered himself to be the “top cat.”

One day he told me how he came to be living here. He said he did have a home once but his owners moved away and left him behind, so then he just lived on the streets. He said it was horrible and he never had much to eat or anywhere nice and warm to sleep. He had lots of nasty fleas that bit him and made him itch and one day someone shot him and he had pellets inside him and it hurt him really badly. He said it hurt so much he couldn’t wash himself very well and that made all his fur very dirty and matted, but nobody ever really noticed him. He was really poorly and didn’t have much energy. It was almost winter time and he wasn’t looking forward to living outside when it was all cold and snowy. Then one day he was under some bushes and a really nice kind man called Harold saw him and picked him up, put him in a basket and brought him here to the sanctuary.
The people at the sanctuary looked after him and gave him some medicine to get rid of all the fleas and then he had to go the vet. He didn’t like going to the vets, he said, they gave him more medicine and tried to brush his fur but it was so bad they had to shave a lot off. He was very bald, but that was when the vet realised that Dinky had been shot and they took the pellets out so they didn’t hurt him anymore.
He liked living here; Julie and Warren and Sandra and Terry all looked after him really well and he had lots to eat and a nice soft bed. Harold, the nice man who rescued him, came to see him every week and Dinky really looked forward to that. As soon as Harold came in and called him he ran to him. He knew Harold always brought him some chicken or tuna and nice things to eat. He was the only cat who had a regular visitor!!! Dinkys favourite spot was the little basket on the window sill and anyone who got in before him did so at their peril!! He used to curl up and go to sleep in the sunshine or sometimes he would sit looking out of the window.
A couple of weeks ago he wasn’t very well and even when Harold came with his chicken he didn’t eat very much. He was a bit wobbly on his legs and couldn’t get on the window sill. When Julie came to feed us she took him home to look after him. I never saw him again. I heard Julie tell someone that she had sat up with him all night. He fell asleep on a nice soft warm cushion on her knee but he didn’t wake up. The following day Harold came to see him for the last time. He was really sad. He took him home and has buried him in his garden.
Dinky told me that he wouldn’t have survived another winter outside and he really appreciated what all the nice people here had done for him, and especially for Harold who rescued him.

We take applications by email once a cat has appeared on our site as available for adoption.

Please see our note on Covid19 on our home page.

To ensure the welfare of our cats, we do conduct homechecks, and so it is not possible to take a cat or kitten immediately. We ask to see ID with proof of address, and aim to do a home / address check within 4 – 5 days.